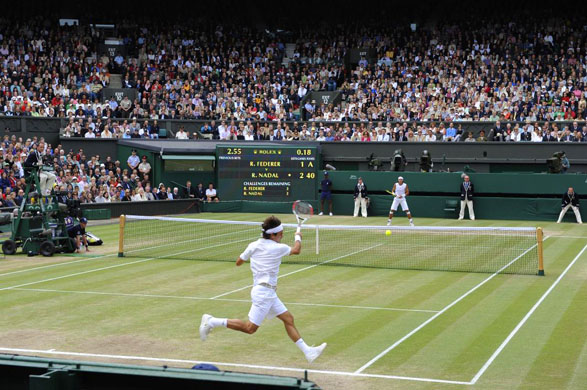 The “crisis in world finance” that I wrote about last time seems set to continue into the new year. At this point, I think I should quit my role as commentator on economic affairs. I am reminded of Ezra Pound, whose unhingement began during the depression of the nineteen-thirties, when he convinced himself he was seeing things about how the economy worked that other people, wrapped up in fictions, were too blind to see: in short order, he turned himself into what Gertrude Stein called “a village explainer,” Uncle Ez.

It is high summer in this hemisphere, and I spent most of Sunday sitting in front of a television screen (shades of Wall Street!) watching the third day of a five-day game of cricket between the national teams of Australia and South Africa. I was absorbed, I was emotionally involved, I tore myself away only reluctantly. In order to watch the game I put aside the two or three books I am in the middle of reading.

Cricket has been played for centuries. As with all games, there are only so many moves you can make, only so many effects you can cause. It is very likely that the proceedings in Melbourne on Sunday, December 28, 2008, duplicate, in every respect that counts, the proceedings of some other day’s cricket in some other place. By the age of thirty, any serious spectator must have moments of déjà vu—more than moments, extended periods. And justifiably so: it’s all been done before. Whereas one thing you can say about a good book is that it has never been written before.

So why waste my time slumped in front of a television screen watching young men at play? For, I concede, it is a waste of time. I have an experience (a secondhand experience), but it does me no good that I can detect. I learn nothing. I come away with nothing.

Does any of this sound familiar to you? Does it strike a chord you recognize? Is sport simply like sin: one disapproves of it but one yields because the flesh is weak?


Your snappy, witty letter from December 30th arrived just two hours before I left for the airport. Now I am in Europe again, a frigid Paris, twelve noon exactly, sitting in my hotel room, unable to go on with the nap I was hoping to take to ward off the effects of a sleepless night. Excuse the funny stationery, excuse the crappy ballpoint pen. For some reason, Paris hotel rooms are not equipped with typewriters…
Watching Sports on T.V.

I agree with you that it is a useless activity, an utter waste of time. And yet how many hours of my life have I wasted in precisely this way, how many afternoons have I squandered just as you did on December 28th? The total count is no doubt appalling, and merely to think about it fills me with embarrassment.

You talk about sin (jokingly), but perhaps the real term is “guilty pleasure,” or perhaps just “pleasure.” In my own case, the sports I am interested in and watch regularly are the ones I played as a boy. One knows and understands the game intimately, and therefore one can appreciate the prowess, the often-dazzling skills, of professionals. I don’t care a lick about ice hockey, for example, because I never played it and don’t truly understand it. Also, in my own case, I tend to focus on and follow specific teams. One’s involvement becomes deeper when each player is a familiar figure, a known quantity, and this familiarity increases one’s capacity to endure boredom, all those dreary moments when nothing much of anything is happening.

There is no question that games have a strong narrative component. We follow the twists and turns of the combat in order to learn the final outcome. But no, it is not quite like reading a book—at least not the kinds of books you and I try to write. But perhaps it’s more closely related to genre literature. Think of thrillers or detective novels, for example…

[Just now, an unexpected call from a friend, who is waiting downstairs. I have to go, but will continue when I return.] Three hours later:

…which are always the same book, endlessly repeated, thousands of subtle variations on the same story, and nevertheless the public has an insatiable hunger for these novels. As if each one were the reënactment of a ritual.

The narrative aspect, yes, which keeps us watching until the final play, the final tick of the clock, but all in all I tend to think of sports as a kind of performance art. You complain about the déjà vu quality of so many games and matches. But doesn’t the same thing happen when you go to a recital of your favorite Beethoven piano sonata? You already know the piece by heart, but you want to hear how this particular pianist will interpret it. There are pedestrian pianists and athletes, and then someone comes along who takes your breath away.

I wonder if any two contests have ever been exactly alike, play for play. Perhaps. All snowflakes look the same, but common wisdom says that each one is unique. More than six billion people inhabit this planet, and supposedly everyone’s fingerprints are different from anyone else’s. Of the many hundreds of baseball games I have watched—perhaps even thousands—nearly every one has had some small detail or event I have never seen in any other game.

Still, one does feel rather stupid after spending an entire day in front of a television set watching young men hurl their bodies against one another. The books sit on the table unread. You don’t know where the hours have gone, and, even worse, your team has lost. So I say from Paris, knowing that when the New York football Giants play a crucial playoff game against a tough Philadelphia team tomorrow, I won’t be able to watch—and I am filled with regret.

With a big salute across oceans and continents,


You write of the young male child’s fixation on sporting heroes, and go on to distinguish this from a mature attitude that seeks the aesthetic in the sporting spectacle.

Like you, I think that watching sport on television is mostly a waste of time. But there are moments that are not a waste of time, as would, for example, crop up now and again in the glory days of Roger Federer. In the light of what you say, I scrutinize such moments, revisiting them in memory—Federer playing a crosscourt backhand volley, for instance. Is it truly, or only, the aesthetic, I ask myself, that brings such moments alive for me?

It seems to me that two thoughts go through my mind as I watch: (1) If only I had spent my adolescence practicing my backhand instead of … then I, too, could have played shots like that and made people all over the world gasp with wonder. Followed by: (2) Even if I had spent the whole of my adolescence practicing my backhand, I would not be able to play that shot, not in the stress of competition, not at will. And therefore: (3) I have just seen something that is at the same time both human and more than human; I have just seen something like the human ideal made visible.

What I would want to note in this set of responses is the way in which envy first raises its head and is then extinguished. One starts by envying Federer, one moves from there to admiring him, and one ends up neither envying nor admiring him but exalted at the revelation of what a human being—a being like oneself—can do.
Which, I find, is very much like my response to masterworks of art on which I have spent a lot of time (reflection, analysis), to the point where I have a good idea of what went into their making: I can see how it was done, but I could never have done it myself, it is beyond me; yet it was done by a man (now and again a woman) like me; what an honor to belong to the species that he (occasionally she) exemplifies!

And at that point, I can no longer distinguish the ethical from the aesthetic.…


…We can leave sports behind if you wish, although I was planning to go on at great length about the second part of the question (participating in sports rather than watching others play them): the pleasures of competition, the intense focus required that at times enables you to transcend the strictures of your own consciousness, the concept of belonging to a team, the necessity of coping with failure, and numerous other topics. At some later point, perhaps, I will sit down and try to write that letter, even if we are in the midst of something else. It’s a subject that still interests me a great deal.

As for the exaltation you talk about when watching Federer in his glory days, I am in total accord with you. Awe at the fact that a fellow human being is accomplishing such things, that we (as a species) are not only the worms we often appear to be but are also capable of achieving miraculous things—in tennis, in music, in poetry, in science—and that envy and admiration dissolve into a feeling of overwhelming joy. Yes, I agree with you entirely. And that is where the aesthetic and the ethical merge. I have no counter-argument, for I have often felt exactly the same way myself.