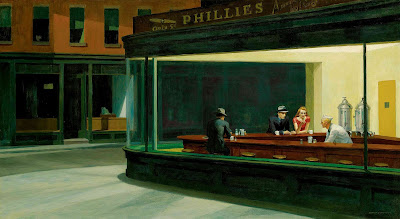 My father is a painter. Growing up with him exposed me to the world of art. He always wanted me to become a painter but the idea of drawing and coloring nature like he does just eluded me completely. Maybe he had been disappointed for being unable to persuade me back then. At least, one of my brother became a painter (partially, not a totally committed one).

Only now, after many years of being persuaded by my father, I started trying to venture into the world of art painting. The first artist that caught my attention was Edward Hopper. “Night Hawks,” the above painting, has become a popular icon all over the modern world and I regard it as his masterpiece. It conveys precisely the postwar atmosphere in America where people are feeling isolated from the world. Hopper was a great admirer of Hemingway's short story and may had got his inspiration from the story
A Clean, Well-lighted Place which had a diner as its setting.

The painting speaks to me more than any poem by Rilke or Dickinson could do in drawing the isolated
emotion of humanity. It is the mood I try and try again to bring into my stories and poems.
Labels: Personal Reflection Sumber Inspirasi