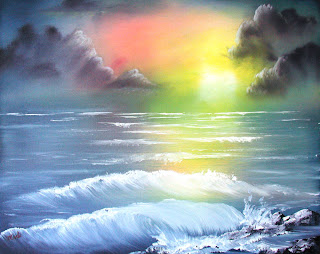 The best novel I read this year is Virginia Woolf’s The Waves. It is also her masterpiece and most experimented work. Every page, every paragraph, every phrase, and every word is immaculate and breathtakingly beautiful. Moving through the novel is like being caught in a gigantic wave that rises and crashes on every page we read. Virginia plunges us into her majestic sea from the very first page:

“The sun had not risen. The sea was indistinguishable from the sky, except that the sea was slightly creased as if a cloth had wrinkles in it. Gradually as the sky whitened a dark line lay on the horizon dividing the sea from the sky and the grey cloth became barred with thick strokes moving, one after another, beneath the surface, following each other, pursuing each other, perpetually.”

I could have chosen other novels: Patriarch, Midnight Children, Lolita, Lord of the Flies, Crime and Punishment, Heart of Darkness, The Great Gatsby, The Outsider etc. But none of them affected me strongly as The Waves. Its aesthetical power even surpasses the great lyrical prose of Kawabata in Snow Country.