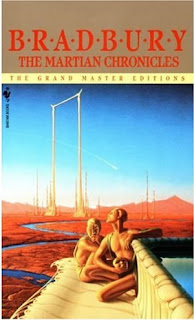 The joy of reading is pushing your imagination as far as you can. Science Fiction (SF) crosses the frontier of everyday reality. Some call it speculative fiction. Yes, it is speculative; but one must take note that it doesn’t predict the future. SF seek to enhance and arouse our experience in life. It is about us and the world we are living today. So it’s completely childish if you read SF to see if the author has figure how the world will look in the future. Fiction is a world of its own; its aesthetical values are the mystery that we must search in our reading.

In The Martian Chronicles, man has escape to Mars. Ray Bradbury collected the short stories he wrote during the 1950s, and structured them into a novel form. The stories are connected by a similar setting (Mars) and theme; the time sequence moves chronologically from 1999 to 2026. We can start reading at any time period because every story is able to stand on its own.

The language of Ray Bradbury is simple and almost free of scientific jargons. His dialogue can be melodramatic at times which I find rather annoying because it disrupts the atmosphere that he has drawn through his lyrical setting descriptions. Moreover, you feel the influence of Hemingway is his dialogue construction. It is effective in some of the stories like The Martian and The Silent Towns.

The Martian Chronicles is not a great literary novel (it would been wrong to read it with that mindset). My expectation wasn’t high when I bought it. And I wasn’t looking for any Nabokovian or Chekhovian or Kafkesque literariness. I wanted the novel to enlighten and expand my mind. It succeed in doing that because you began to wonder what will happened in the future if mankind has the opportunity to start a new life on Mars? Will we migrate there and leave Earth to its own disastrous fate? In the third phase of this novel (2005-2026), the nuclear war on Earth has ended and humans are restarting a new life on Mars. Today, we rarely hear of a global nuclear threat. But who knows what will happened in the future.

fadz said…
The beauty of Bbradbury, as many SF writers hava come to conclude, is how he can combine both the world of popular fiction with serious fiction. The Martian Chronicles is an example of this experiment.. Still, for SF readers, this is a 'must'.
November 23, 2008 at 10:05 PM

Wan Nor Azriq said…
Thanks fadz for visiting.Yes,i think it is a must read novel as well.Still,there are other great SF novels out there.
November 25, 2008 at 9:12 PM