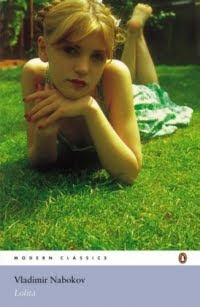 Lolita is reading me again as I am reading her. Lolita and I had our first literary-mating (or pedophilic-mating if you prefer) in early 2007 - Lolita since then has continued to prowl my literary apatite from time to time as though she is still continuously and lustfully looking for her already dead-lover HH, or her already dead-godfather Nabokov.

153, if you have the Penguin edition above, is the page-room I am currently in with Lolita - and Nabokov too of course - even though he had fiercely claimed that his writings are original and does not have any influence of Joyce and Flaubert. To a certain degree, he is right because unlike Joyce and Flaubert, he did not transformed himself into an 'invisible God' that is present everywhere in the text, instead he reincarnated himself into Humbert Humbert which allowed him to used HH as a surrogate or zombie or clone that will execute the master's stylish-lust. So it is safe to say that HH is Nabokov, not in a moral sense, but in an aesthetical or literary sense. As for the Flaubertian tradition, Nabokov is still part of it, but he is without Flaubert's universal and ironical vision, and falls short of Joyce's linguistic originality. Nevertheless, I still consider Lolita a great novel and everytime I come back to it (or her) I always find something fresh to learn and apply in my writing. Lolita, with Tristram Shandy and Epitaph of a Small Winner, is one my favorite literary-playbooks. Allow me to share with you an excerpt from page-room 153:

"At night, tall trucks studded with colored lights, like dreadful giant Christmas trees, loomed in the darkness and thundered by the belated little sedan. And again next day a thinly populated sky, losing its blue to the heat, would melt overhead, and Lo would clamor for a drink, and her cheeks would hollow vigorously over the straw, and the car inside would be furnace when we got in again, and the road shimmered ahead, with a remote car changing its shape mirage-like in the surafce glare, and seeming to hang for a moment, old-fashionedly square and high, in the hot-haze. And as we pushed westward, patches of what the garage-man called "sage brush" appeared, and then the msyterious outlines of table-like hills, and then red bluffs ink-blotted with junipers, and then a mountain range, dun grading into blue, and blue into dream, and the desert would meet us with a steady gale, dust, gray thorn bushes, and hideous bits of tissue paper mimicking pale flowers among the prickles of wind-tortured withered stalks all along the highway..."
Labels: Kritikan Novel Projek 100 Novel Ulasan buku dan penulis