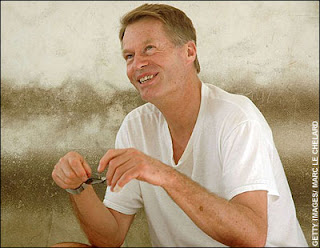 Surprisingly, the winner of this year Nobel Prize is a French novelist name Jean-Marie Gustave Le Clézio. I was expecting the winner to be Salman Rushdie or an American author (McCarthy or Thomas Pynchon). I was even being too optimistic in hoping that Haruki Murakami would win the prize; even though his name was rumored with other writers.

There is nothing much I can say about Le Clezio because I never read his novels or essays. I just want to share with you his quotation that I extracted from The New York Times:

“My message will be very clear; it is that I think we have to continue to read novels. Because I think that the novel is a very good means to question the current world without having an answer that is too schematic, too automatic. The novelist, he’s not a philosopher, not a technician of spoken language. He’s someone who writes, above all, and through the novel asks questions.”

Writers are always asking qustions, not just to themselves, but also to the reader. It is true that a writer is not a true philosopher because his main responsibility is to become a great artist that will arouse questions concerning life, philosophy, or even religion through the aesthetical journey of his/her works.

Again, the prize is won by an European writer, and again we are still waiting for a winner from Malaysia. I belive we have many strong candidates, but the exposure of our literature on the global stage is still gloomy. I heard some our writers saying that it is not important to win the prize as long as your works are being read by the people in your country or nearby neighbours. Yeah right, that is very comforting to hear. The truth is, writers want their works to be appreciated and continously read by readers from the entire world. Even if they are not driven by international prizes, they still want their works to be access by other people, and the Nobel Prize has always been seen as the ultimate sanctum that writers can be burry their liftime achievment as a reference for future genaration.
Labels: Personal Reflection