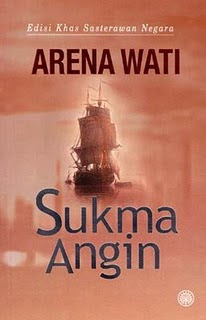 We find this kind of passage more often in Malay novels, especially by those so called ‘literary writers,’ that our amateurish readers readily accept as realism. As you can see I did not finish the passage, which was already dragging and dry and was unable to stimulate any aesthetical satisfaction, and I find it totally nonsense the fact that in order to tell the truth of life, via literature, a writer must do it by flooding the reader’s mind with endless factual description. Facts for the sake of facts is not realism but merely an attempt to parade one's intellectual merit, one's sense of patriotism, and recently, which has become a market trend, one's religious belief. A typical Malay reader will easily be fooled by this passage and regard it as a mark of a pure literary novel. The critics, yes let us not forget the bright-minded critics, once they see this kind of passage they will begin scrambling in their minds the best and most academic theories that will highlight Arena Wati’s attention to zoological facts and his willingness to teach and educate the public on the importance of knowledge. Facts, my dear readers, may be 'real' but they are not alive as they fail to evoke the truth of life. They fail to bring reality closer to our imagination.

The great imaginative writers, such as Kafka, Hamsun, Dickens, and Beckett, created texts that did not represent the normal life or 'real life.' Can we ever imagine ourselves turning into a bug one morning as we wake up from sleep? Can we imagine eating ourselves like Hamsun's character did? Of course not because it is not real, because we don't see ourseleves doing it in real life, but still anyone who has read The Metamorphosis or Bleak House or Endgame, will find these texts more truthful than, let say, a novel by E. M. Forester or Wilkie Collins even though these two writers created a much more realistic world.

Life escapes in Arena Wati's novels. He succeeded in bringing us to his world, but failed to bring life closer to us the way Shahnon Ahmad did or the way A. Samad Said did, brilliantly, in Sungai Mengalir Lesu.
Labels: Bicara Sastera Kritikan Novel Projek 100 Novel