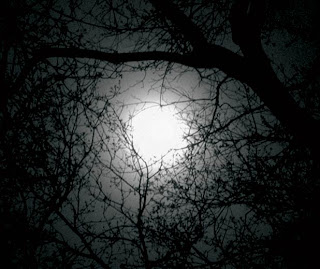 In a large town there was an old woman who sat in the evening alone in her room thinking how she had lost first her husband, then both her children, then one by one all her relatives, and at length, that very day, her last friend, and now she was quite alone and desolate. She was very sad at heart, and heaviest of all her losses to her was that of her sons, and in her pain she blamed God for it. She was still sitting lost in thought, when all at once she heard the bells ringing for early prayer. She was surprised that she had thus in her sorrow watched through the whole night, and lighted her lantern and went to church. It was already lighted up when she arrived, but not as it usually was with wax candles, but with a dim light. It was also crowded already with people, and all the seats were filled, and when the old woman got to her usual place it also was not empty, but the whole bench was entirely full. And when she looked at the people, they were none other than her dead relatives who were sitting there in their old-fashioned garments, but with pale faces. They neither spoke nor sang, but a soft humming and whispering was heard all over the church. Then an aunt of hers stood up, stepped forward, and said to the poor old woman, look there beside the altar, and you will see your sons. The old woman looked there, and saw her two children, one hanging on the gallows, the other bound to the wheel. Then said the aunt, behold, so would it have been with them if they had lived, and if the good God had not taken them to himself when they were innocent children. The old woman went trembling home, and on her knees thanked God for having dealt with her more kindly than she had been able to understand, and on the third day she lay down and died.
Labels: Sumber Inspirasi Tales