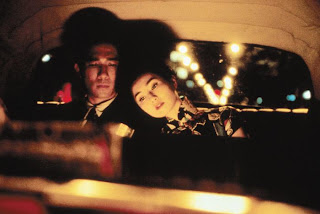 Some have called him the Martin Scorsese of Asian Cinema. Some have called him the Godard of Asian Cinema. Some have even called him the Borges of Asian Cinema. I believe it is better than we just call him the best living director in if not the world. No other living director, no even Tarantino and Scorsese, can surpass the sublimity of Wong Kar-wai’s films. His three best films are In The Mood For Love, Chungking Express, and Happy Together. I personally love all of them, especially In The Mood For Love. The power of Mood For Love is the form, the cinematic presentation, the directing vision, the cliché retro soundtracks, the cliché retro costumes, and definitely the superb acting of Tony Leung and Maggie Cheung. I find it interesting when Wong said that he was thinking of Hitchcock’s Vertigo while making this film. I don’t see any Hitchcock at all in this film, but more of Godard’s fast cutting and jump cuts. The influence of Godard reminds us of Tarantino who was also heavily influenced by him in earlier films such as Pulp Fiction. However, unlike Tarantino, Wong doesn’t makes his films look ‘pulp’ or postmodern; he doesn’t need to parody every single B-movie in ; he doesn’t need to have his actors talk, talk, and talk in every single scene. It is famously said that Wong goes into shooting without a screenplay. Instead, he writes and improvises his script as he goes along on set. Well, if you watch all his films, that does seem to be the case, and as a result he creates layers of mystery in his story presentation.

This year alone, I must have watched Mood For Love more than five times already. It is simply the best movie of the year in my DVD collection and also my cinematic experience.