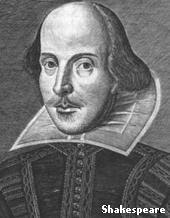 He was not of an age, but for all time! (Ben Johnson)

[Shakespeare] is the very Janus of poets; he wears almost everywhere two faces; and you have scarce begun to admit the one, ere you despise the other. (John Dryden)

He was not a man, he was a continent; he contained whole crowds of great men, entire landscape. (Gustave Flaubert)

One never sees Shakespeare played without being reminded at some new point of his greatness. (Henry James)

When I read Shakespeare I am struck with wonder

That such trivial people should muse and thunder

Shakespeare is the Canon. He sets the standards and the limits of literature. (Harold Bloom)