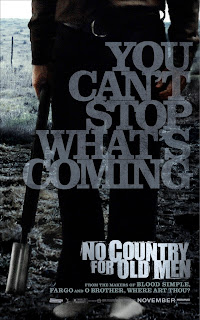 This movie really caught me by surprise when it won the Academy Award for best picture. First, I haven’t seen the movie at that time. Second, I was expecting There Will Be Blood to win because I thought it was such an excellent and sublime movie and it also had many parallels with Joseph Conrad’s theme of human darkness. After watching the award ceremony on TV, I went to a nearby DVD store and, surprise surprise, there was already a pirated disk of No Country For Old Men. I bought it, went home, and watched it and when I finally reached the end I was very satisfied.

For those who haven’t seen the movie, I recommend you watch it first before reading the novel by Cormac McCarthy. The novel of course is better in terms of character and development of theme, but the physical actions and murders by Anton Chigurh (the antagonist of the story) are more satisfying in the movie version. In the movie, Anton Chigurh is played by Javier Bardem which won him the award for best supporting actor. In order to understand the story, you will need to go through the character of Anton Chigurh. For some viewers, he will be seen as a complete psychopath who murders people without any remorse. In the opening scene he murders a police officer by strangling him with a handcuff. It was a brutal scene and one of the most disturbing I have ever seen in the opening of a movie. But it was certainly effective because you are immediately pulled into the whole laconic and macabre milieu of the movie.
What is the movie all about? You may begin asking this question when you are left hanging at the end since no resolution has been solve. My advice is that you watch it again or even better read the novel itself. In the novel, you will find all the missing loopholes that were left out in the movie. This is no sweet popcorn movie that you would get from Titanic or Spider Man. And it is also not a typical Western or gun banging action movie. It's a serious drama with a serious message that it wants you to see.
Labels: Movies