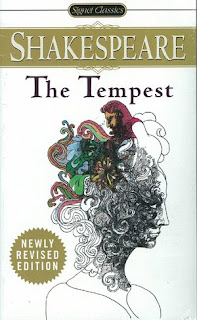 The Tempest has been on my mind over the past few weeks. When I first read it, I felt an immediate connection with Caliban, the slave of the wizard Prospero. Is he an antagonist to Prospero? Yes, he is, but I do not see him as an evil figure or a cannibal (the name does suggest a cannibalistic origin but it could have been created by Prospero himself in order to enslave Caliban under his power).

After reading this play, I went to the library to read what Harold Bloom had to say about this play. As I have expected, Bloom did not favor the way the play has been interpreted by cultural critics who tend to see the text as a colonial discourse. Moreover, recent stage performances of The Tempest have recreated Caliban as a kind of “freedom fighter” for the Caribbeans or even postcolonial countries in general. Bloom has a point in stating that we should be reading the play as it is intended by Shakespear. But by ignoring the cultural aspects that are hidden behind a literary text we are also denying its existence as an organic text.

Why do I like Caliban? Maybe it is because I see him everywhere in our country. As a postcolonial country, we have been trying to create our own national identity since we gain independence; an identity that is uniquely our own, free from any influences of our previous colonizers, especially the English. The way I see it, we are far from achieving this objective or maybe we never will. Look around us, culturally and politically, the colonizers have never left us; we have only assimilated their culture with ours. Maybe it is a good thing or maybe it is not; it all depends on how you view reality.

One thing I did not like about Caliban was his unwillingness to fight for his right as the ruler of the island. When he conspired himself with Stefano and Trinculo to overthrow Prospero, he did out of revenge instead of trying to claim back the land that was rightfully his. Then, he was also willing to make Stefano his new master on the island. Prospero’s magic and knowledge has made him an inferior creature.

My interpretation of the play is just one way of reading it. You do not have to agree with what I have said because I believe everyone has their own way of viewing a literary text. Who knows, maybe twenty years from now, the text will no longer be seen as a colonial discourse. Even today, I think many critics have exaggerated the political contents in many of Shakespeare’s plays (especially The Tempest, Othello, and A Midsummer Night’s Dream). Sometimes, in order to enjoy the beauty of art, we should just let the text take us to where it wants us to go instead of trying too hard to figure out what or who is behind the driver seat.
Labels: Personal Reflection

Greenbottle said…
just came across your blog through bibliobibuli...you write really well.
October 13, 2008 at 7:22 AM