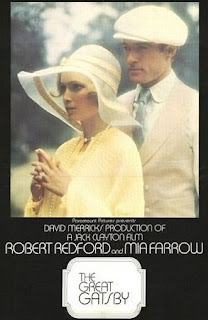 Watching a movie adaptation of a novel is never a substitute for reading the text itself. A movie version can help enhance our imagination and understanding, but it is still limited to the director's interpretation. Moreover, we would do serious injustice to the novel’s author by not reading his/her text.

A few days ago, I was very fortunate to watch The Great Gatsby on HBO. It was already late; somewhere around 3 in the morning; I was already planning to sleep when this movie came up on television. This was the second time HBO screened a movie adaptation of a classic novel late in the morning. The last time was Wuthering Heights; I managed to watch it for just a couple of minutes before sleeping on the sofa. Too bad, I always wanted to see the movie version. HBO should be showing these movies during normal waking time. I guess no one watch classic anymore; that’s why they put it on the night owl time zone.

I have read The Great Gatsby during my second semester, and reread it again for literature class. It is a novella actually; a little bit longer than Conrad’s Heart of Darkness and James’ Daisy Miller. Like all novellas, I recommend that readers read The Great Gatsby in one sitting. It is a love novel during the post war and jazz era. Nick Carraway, the narrator, has just rent a cottage between two very rich mansions in West Egg. The inhabitants of East Egg are the “old-money” or aristocrats who indulge themselves in wealth; people such as Daisy, and her husband Tom Buchanan. In West Egg are the “new money;” ordinary Americans like Gatsby who are trying to climb the social class. Gatsby tries desperately to become an aristocrat in order to win Daisy back into his life; but only to find out later on the huge gap between them that can never be bridged. Dishonesty and fakeness becomes a poison to Gatsby on life; his associations with the underworld and illegal activities were seen as immoral acts by Daisy. Ironically, Daisy’s moral standard is restricted to her own social class.

The movie version is almost equally on par with the novel. Viewers might get turn down during the first few minutes by Mia Farrow’s (Daisy) overacting. Once we meet Robert Redford (Gatsby) at the party, the movie starts to become interesting. It is a typical Robert Redford performance, but his acting blends well with some beautiful cinematographic moments in the movie. Seeing Robert Redford floating in the big pool, accompanied by a jazz song in the background, and then sinking to the bottom after being shot, is indeed my favorite scene. All the major symbols from the novel are still shown in the movie, but they don’t deliver a very significant impact to the overall mood of the movie. The decadent of American society and the illusion of the American Dream doesn’t come to the surface as you would find from the novel. Too much emphasize was given on the costumes and the love relationship between Gatsby and Daisy.

I wish we had more movies adapted from our Malaysian novels. It would be interesting to see Salina or 1515 on the big screen. Literature needs to stay alive in the pubclic imagination. Movies can help to extend the aesthetical value of a literary work. It might not be equally good as the novel, but thats the beauty of literature: everything is open to interpretation.