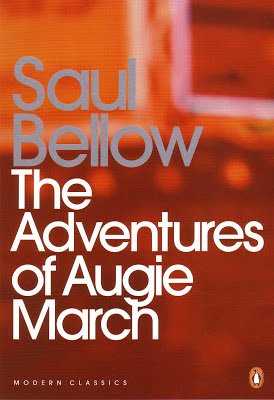 
I don’t get may letters about Augie that I feel like answering. By pressure of numbers, society can make a specialist of you, if in no other way. Augie threatens to become my specialty as flying the Atlantic became Lindberghs’—allow me one more immodest analogy: as jumping from he bridge became Steve Brodie’s.

With this preface, let me say that I thought your letter one of the best, a terribly acute criticism. I’m not at all inclined to counter your criticisms. You’re a writer yourself, a real one; you know that self-defense is not what we ought to be thinking of. I made many mistakes; I must plead guilty to several of your charges. Yes, Augie is too passive, perhaps. Yes, the episodes do not have enough variety; the pressure of language is too constant and uniform. That he is too august I think I might dispute. At least I felt his suffering sharply—maybe I didn’t get it across. He isn’t, to me, an Olympian. Only, he’s engaged in a War of Independence and the odds are vastly against him. It is devaluation of the person that he fights with. No doubt this war, like any war, produces exaggerations. Our passivity often is so deep that we do not recognize that the active spirit underneath has meanwhile organized an opposition, an opposition that wears the face of passivity. Some of the trouble is Augie’s; some of it the world’s. That is no excuse in literature, though it may be one in history. But I can’t claim that I was trying for perfection. There are times when I think how nice it would be to edit a new and better novel out of it. But I can’t allow myself to forget that I took a position in writing this book. I declared against what you call the constructivist approach. A novel, like a letter, should be loose, cover much ground, run swiftly, take risk of morality and decay. I backed away from Flaubert, in the direction of Walter Scott, Balzac and Dickens. Having brought off my effort as well as I could, I must now pay the price. You let the errors come. Let them remain in the book like our sins remaining in our lives. I hope some of them may be remitted. I’ll do what I can; the rest is in God’s hands.

Two things about the book please me still: the comedy and the characters. Many people have missed what, to me, is the fun of the book. They suffer from culture-gravity. They say “picaresque” and don’t laugh. The baseball experts landing on your Natural with both feet are in the same league: sinners against imagination and the spirit of comedy.

I’m very grateful to you for writing.