What Time is it Wallace Stevens? 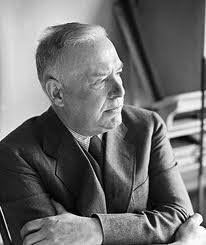 The houses are haunted
By white night-gowns.
None are green,
Or purple with green rings,
Or green with yellow rings,
Or yellow with blue rings.
None of them are strange,
With socks of lace
And beaded ceintures.
People are not going
To dream of baboons and periwinkles.
Only, here and there, an old sailor,
Drunk and asleep in his boots,
Catches tigers
In red weather.

What are we to make of this type of poem? What is the meaning? I don't know. I don't care about the meaning. The poetry in itself is already beautiful and intriguing. "Catches tigers / In read weather," does sound absurd: why would a poet write something like that? Well, why not? I rather read imaginative lines like this everyday than the intellectual verses that we find in all of Muhammad Haji Salleh's poems. Of course, Muhammad is our best poet; he is the orchestra of the Malay consciousness; he has become a kind of a standard that every Malay poet must aspire to become or surpass, if possible. In short, to become a Malay poet is to become intellectual; to become a Malay poet is to become Malay.

But what of life? How can a poet sings the songs of life if the lute that he plays knows only the breezing notes of the Malay mind? To some critics, like Harold Bloom, Stevens is the best representative of the American poet. Indeed, he is very American: we see Emily Dickinson, we see Emerson, and we see Walt Whitman even though Stevens doesn't need to be a Whitman type of poet the way Neruda and Borges did. However, as much American as he is, there is a universal sublimity in his poems that transcend any political, any historical, any regional labels that you could put on him. Such quality exist only among the best. Stevens is one of them. So does Emily Dickinson and Walt Whitman; the only two American poets that are able to surpass Stevens' originality. Even if we are to go beyond the shores of American poetry, we will still find similar poets with similar universal quality. Take Poland for instance, which in my mind, at the moment, is the greatest poetic-nation in the world. Look at Rozewicz, look at Miłosz, look at Szymborska, look at Zagajewski. These are all universal poets. Of course, they are not the Stevens-type, but like Stevens, their voices speak for the silent voices of all solitary readers. Poetry is the voice of the individual. Never, never, never, the voice of the collective-mind. Stevens may not be Malay, Stevens may not be as intellectual as Muhammad and Baha Zain, but his art breaks all boundaries and penetrates deep into our imagination. That is where Stevens' poetic oeuvre resides. That is where the poet inside all of us lives.

As we go on talking about Stevens, I realize that here in our country, Stevens is absolutely unknown. We hear more the name of Robert Frost and T. S. Eliot being praised (I doubt our poets even read the Wasteland). I never heard or read Muhammad or Baha Zain or A. Samad Said talk about Stevens' work. How can they? He is not them. He is so beyond them. Modern poetry has yet to make a deep impact in Malaysian poetry. We think we are modern, but we are far from it. We are still singing in the dark while the ghost of Chairil Anwar and Amir Hamzah are laughing right outside our door. Modern poetry is invisible and cerebral. In modern poetry, like all of Stevens' poems, the theater is always empty. The audience is never visible. A poet is just an old sailor who is no longer sailing with reality. He only dreams and sings to the empty void as if all the empty seats are the empty minds of the modern readers. What a complete disillusionment. And we are so beyond ten o' clock. Or are we?
Labels: Bicara Sastera Bicara tokoh Kritikan Puisi Sumber Inspirasi