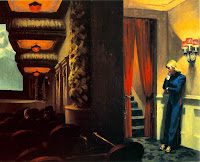 Dedicated to my loving friend: Alice

The meaning of love is… oh, well, we all know what it means. There is nothing I can add that will illuminate your romantic notion of love. There is nothing I can say that will change your mind. There is nothing I can say that can be trusted. My impressions are not my own. My experiences are the experiences of others. I only render them into my dreams so that, in my dreams, I may be asleep and awake at the same time. A dreamer goes into the world in order to create his inner labyrinth of solitude. Hence, the words of a dreamer should always be doubted. Besides, a youth (I’m twenty-four) attempting a discourse on love is running the risk of being accused of immaturity and favoritism. I experience life as it presents itself to me; as for its metaphysical, or biological origin, I restrain myself from venturing into this region of infinite abstractions. There are many things in life, love for instance, that are better left unsaid. So, for the remainder of this paragraph, I shall remain silent.

Never seek to tell thy love,

Love that never told can be;

For the gentle wind does move

I told her all my heart;

Ah! she did depart!

Soon as she was gone from me,

A traveler came by,

He took her with a sigh.

My father is a painter. It is through his experience as an artist that I learn what I can about the world of art. But, in truth, I don’t know anything about paintings. Even when I look at one, Edward Hopper’s New York Movie for example, I am not actually looking at the panting: I am only dreaming: I am only recreating my own vision of Hopper’s world; my own vestige; my own simulacrum: I am merely, trying, to transform Edward Hopper into me.

When I look at the blonde woman in that painting, I can’t avoid concluding that she is mad. But I also think she is lonely and beautiful. Her beauty is her silence. Her silence is her contemplation. Her contemplation is her uncertainty. Her uncertainty is her passion. Her passion is the power of art. Nevertheless, as she stands outside the brothel of cinema, waiting for her lost lover, she begins to feel the warmth air in her bosom turning cold, and her body slowly decaying into a phantasmal existence.

But I have said too much already. Let us be silent for a while.

The day before I wrote this essay, I was sitting at my desk observing the motionless clouds of a sombre afternoon; reminiscing on distant childhood; escaping, for a moment, from myself, when suddenly I felt a pang of loneliness. I could have averted my loneliness by going for a walk around : the very deformities of , which give distaste to others, have yet to displease me. I even consider this urban walking as the most fruitful activity of my daily life. I love losing myself in a crowd. I love the silence of solitary walking while the city around me is bustling with noise. I love the very smoke and dirty streets of . I would favor such bleakness on any day than all the fresh country air you could offer me. In short, the city is me as much as I am the city. My other option was to escape to a bookstore, Kinokuniya most probably, where I could survey the books that I have short-listed in my book-to-buy-list; then having found my desired mistress among the bookshelves, I would seclude myself and my lover in the most remote corner of the bookstore and read her, page after page, attentively, as one would admire the beauty of nature. However, instead of committing myself to these outdoor therapies, I decided to remain in my inner-sanctum and chose poetry as my remedy. I decided to escape into poetry.

It is easier to escape oneself from the world by reading poetry. The simplicity and compactness of the verse demands little labor of our intellectual muscles. In fact, the Muse (always being female) is not attracted to limpid-hearted scholars; she is not tempted by common-place ideologies or even the most fashionable theories; she stands neither above nor below the general public, but outside of it; she is the very essence of nature and hence the extension of a poet’s imagination and erotic desires. To win over her love, the Muse demands that we be passionate and sensitive to the language of nature since the odour of her bosom carries the credo of John Keats:

“If poetry comes not as naturally as the leaves to a tree it had better not come at all.”

But poetry itself, like any art form, is limited. Language is limited. Language cannot capture the entire myriad impressions of life. Even the language I am using is not me entirely. I am not writing in English, because to do so I must possess some Englishness inside of me, which I do not, but what I am writing instead is merely using the language of my own inner self. It would not make any difference if I wrote in Malay, or Mandarin, or Tamil, since none of this language will be able to draw a complete portrait of myself. Language is not a representative of the spiritual life. Language swims on the surface of our minds as poetry swims on the surface of verse. Language is only the beginning. Non-language – silence – is the journey into life. Uncertainty is our destination which leads to further uncertainty. In the end, we are left only with questions, desires, as Marcel Proust called them, and this is the purpose of art.

In silence, we become innocent. In silence, we contemplate on the past as Hamlet contemplated with Yorick’s skull. In silence, we let our imagination take over our rational faculties and thus descend into the depths of our inner spiritual existence, as Don Quixote, in the beginning of the novel, after he read all those books of chivalry, went into the caverns of his imagination, further than any man has ever gone, before and after him (perhaps only to be surpassed by Shakespeare and Dante), and out of his chivalric journey, Don Quixote became the poetic madman (the mind of a genius is always mad) as we know him today. In silence, we become one with nature; we become one with the great poets who are the children of nature; we become Walt Whitman and sing with him a Song of Myself. In silence, we let silence speaks for herself. Nothing more should be said.

Here is Walt Whitman describing his happy hour with nature:

“A clear, crispy day – dry and breeze air, full of oxygen. Out of the sane, silent, beauteous miracles that envelop and fuse me – tress, water, grass, sunlight, and early frost – the one I am looking at most today is the sky. It has delicate, transparent blue, peculiar to autumn, and the only clouds are spiritual motion to the great concave. All through the earlier day (say from 7 to II) it keeps a pure, yet vivid blue. But as noon approaches the color gets lighter, quite gray for two or three hours – then still paler for a spell, till sun-down – which last I watch dazzling through the interstices of a knoll of big tree – darts of fire and a gorgeous show of light-yellow, liver color and red, with a vast silver glaze askant on the water – the transparent shadows, shafts, sparkle, and vivid colors beyond all the paintings ever made.

I don’t know what or how, but it seems to me mostly, owing to these skies (every now then I think, while I have of course seen them every day of my life, I never really saw the skies before), I have had this autumn some wondrously contented hours – may I not say perfectly happy ones? As I’ve read, Byron just before his death told a friend that he had known but three happy hours during his whole existence. Then there is the old German legend of the king’s bell, to the same point. While I was out there by the wood, that beautiful sunset through the tress, I thought of Byron’s and the bell story, and the notion started in me that I was having a happy hour. (Though perhaps my best moments I never jot down; when they come I cannot afford to break the charm by inditing memoranda. I just abandon myself to the mood, and let it float on, carrying me in its placid ecstasy).”

And here is what Chang Ch’ao (a mid-seventeenth century Chinese writer) had to say about literature:

“Literature is landscape on the desk, and a landscape is literature on the earth.”

“There’s an aesthetic to wasting time.”

And I like wasting my time on the LRT. While sitting or standing, I often observe other people in order to observe myself; I often overhear other people in order to overhear myself; I often yawn as they yawn, sleep as they sleep, dream as they dream, so that I may create my own lazy habits, my own lethargic personalities, my own banal dreams – the modern man is often caught in that Kafka-Gregor Samsa-like dilemma that forces him to chose between being a mechanical unit of society, or being an individual, thus metamorphosing oneself, unwillingly, into an unwanted bug. I do know, however, that not everyone is like me. Most people won’t waste their time on the LRT, nor consider it as something aesthetical.

But isn’t wasting time itself a necessary condition for anyone wanting to escape into silence?

Again here, silence, is playing her charms in arousing our deepest inner desires for life. We can’t help but fall in love with her – at least I do.